“Amma, amma”, cried 3 year old Monis as a shard of glass hit him in the eye. He was not aware of how it happened, just that one minute he was playing and the next he felt excruciating pain in his left eye.

Saima ran outside fearing the worst as she heard her youngest child’s cry of pain. When she saw little Monis holding his hand tightly over his eye and a drop of blood falling out she almost fainted. Within seconds her mind became a reel of images of her beloved child either going blind or having a disfigured eye for life. She panicked and started shouting for help. Her elder daughter ran to their neighbor’s house; the neighbor’s son drove a rickshaw and luckily he was home and took them to the nearest hospital. 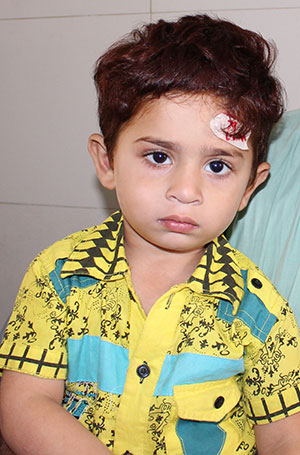 The emergency doctor examined Monis and reassured the worried mother that thankfully the shard of glass was not lodged in his eye. He prescribed eye drops and sent them home. Not quite satisfied, Saima closely monitored Monis over the next couple of days. It soon became apparent that something was amiss when Monis was unable to see faraway objects clearly. Over time the injury had turned into cataract. Seeing Monis become distant and quiet was devastating for the family. Monis’s father, Mohsin, worked as an office messenger in a factory and was already struggling to make both ends meet as he was the only bread earner for a family of six. He asked for a loan to take his son to a good ophthalmologist but his request was refused.

Due to his condition Monis, had to be withdrawn from preschool. The young child could not fathom why his life had changed so drastically, he used to beg his mother to let him go outside to play and often asked when his eyes would get better.

Mohsin could not bear the melancholic atmosphere that had befallen his previously lively home. He would get up at night daily to pray, something he had not done in a while, hoping for a miracle. Good news came a couple of weeks later when some relatives contributed whatever little they could for his treatment. Mohsin took his son for a checkup and the doctor diagnosed cataract in his left eye and high refractive error in his right one. The doctor told Mohsin to take the earliest possible date for surgery but seeing Mohsin’s crestfallen expression he knew something was amiss. Mohsin confided that they could not afford any such treatment and he was unable to hold back his tears.

The doctor having seen many such people who were deprived of care and would often spend their lives in darkness because of unaffordability advised him to take Monis to LRBT. He assured Mohsin that his son would get quality care at no cost.

Monis was examined thoroughly in the pediatric department at LRBT’s largest hospital in Korangi. He had a successful surgery and the look of pure joy on his face when the bandage came off was a sight to behold. At his follow-up, Mohsin while waiting for their turn came to thank the staff at LRBT and said, “Seeing Monis playing with his brother and sister just like before fills my heart with unspeakable joy, my child came so close to being condemned to a life of darkness and misery, his future stolen from him. I cannot thank LRBT and its donors enough for enabling my son to see once again.” 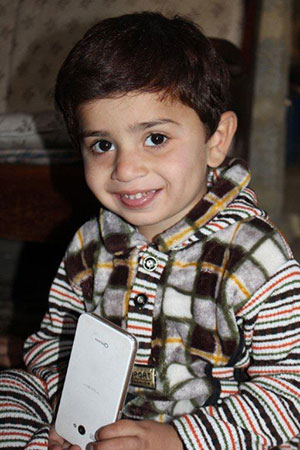