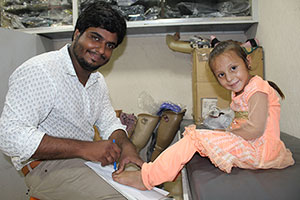 “I earn my livelihood making prosthetics and enabling the handicapped to live as normal a life as possible. The look on their faces when they realize that they can walk or use their arms is priceless. My work is a source of great pride for me. I just never imagined that one day I will be in their position….”

Haseeb recalls his harrowing tale while talking to the doctors at LRBT. 26 years old and father to a beautiful one year old girl, he lives in Karachi and earns his livelihood by working in a prosthetics shop. He is the only son and brother to five sisters, his sisters are all older than him and married. Haseeb’s father is retired and suffers from diabetes and blood pressure and his mother is bed ridden. 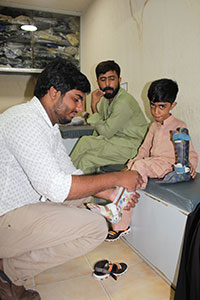 Haseeb, being the youngest was left to his devices and it was one day while playing that he saw his neighbor come home after a limb amputation. Concerned he went up to their house to enquire what had happened and got to know that his neighbor’s leg had to be cut off to stop an infection from spreading. The first thought that popped into his mind was, how will he walk again?

He came home and asked his mother who was as clueless as him. Living in a low income neighborhood they did not have access to good medical facilities and hope for betterment was close to nil for residents of Haseeb’s locality. So one day when he saw his neighbor walking with a stick he was shocked; to his young mind it was a miracle. The neighbor then showed him his artificial leg and said his employer had arranged and paid for the prosthetic for him so that he could walk once again. It was at that moment that Haseeb resolved to do something to help the disabled lead as normal a life as possible.

Haseeb used to attend the local school but when his father retired he had to drop out and do odd jobs to support his family. Eventually he let go of his dream of helping others being so caught up in his own problems. It was fate that through a friend Haseeb got to know about an opening in a shop that made prosthetics. He immediately went to apply and got accepted. Even though the pay was only marginally better than his previous job yet this is what he had always wanted to do.

He had been working there a couple of years and during this time he got married and had one daughter; even though he was unable to save anything yet he was content… till an incident changed his life completely; he was walking to the bus stop from work when a stray stone hit him in the eye. He felt pain and started to rub his eye which made it worse, once home his wife gave him some ice which made it temporarily better, however after a couple of days his vision started to blur. Worried he visited numerous Ophthalmologists often having to take loans from friends and family to pay for the fees and medicines but nothing worked. Eventually he lost vision in one eye… 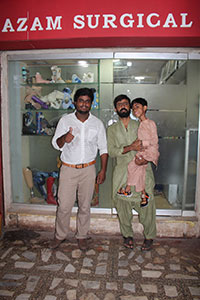 He was overwhelmed by the way his life had changed so drastically, he experienced firsthand the pain and difficulty of those who were physically handicapped, everyday tasks had become a struggle, his work was suffering and he was getting disheartened day by day. Although his work centered on making artificial limbs to makes lives of the handicapped easier yet he was unable to do anything to help himself…

It was a chance encounter with a fellow traveler on the bus that he got to know about LRBT Korangi and its state of the art eye care which was completely free for the poor. With a lot of hope he came to LRBT and did not return disappointed. He was diagnosed with corneal opacity and underwent a corneal transplant. A procedure that gave him his sight back and one which he otherwise would not have been able to afford… “I am amongst those few lucky ones who got the chance to live a normal life once again, a chance to be a son, husband, father and provider for my family. It’s a miracle and I pray that everyone whose life has been struck with tragedy finds places like LRBT which enable them to have another shot at life.”