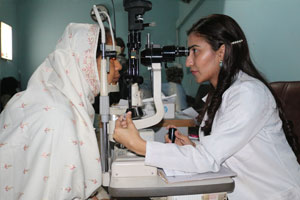 “Amma Amma’ cried out my youngest son as while turning in his sleep he fell off the bed and needed help to get up. Cries like these often left me shattered fearing the worst. Three out of my eight children suffered from intense muscle weakness and were handicapped. Being a lady health worker myself, I left no stone unturned trying to find a cure for the ailment but to no avail. All the doctors and hospitals turned us away saying there is no cure till my dearest youngest son succumbed to the disease. I felt like the world had ended when I lost my baby boy, but I picked myself up to take care of my family, only to lose my husband to grief a couple of weeks later.” Recalls Qamar Jehan with tears in her eyes.

She was married when she was only 18 years old. Her husband, a rickshaw driver, was a family man and supported Qamar in pursuing a career. Being an only child Qamar’s mother came to live with her when her husband passed away. Qamar would leave her 8 children with her mother while she went work. She is a lady health worker and has to go door to door in slums to convince residents to opt for the ongoing vaccination drive. Her job is not easy, walking long distances, endlessly waiting for people to open the door and begging them to give her 5 minutes to listen to the importance of vaccinating their children. In a society like Pakistan where lack of education leaves people suspicious of anything to do with medication, Qamar had her work cut out for her. She was left drained and had to look after her three handicapped sons when she came home, whose disease had progressed so much that they were unable to even feed themselves. 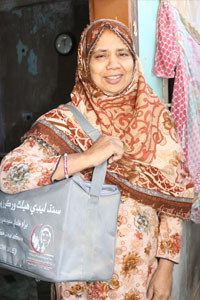 Despite all these difficulties Qamar remained strong, she married off her two daughters and once her sons found jobs they got married too and moved out. With families of their own they did not contribute to the income, she and her husband ran the household paying the rent and utilities. Qamar’s mother was aging and her medical bills were piling up, Qamar started doing extra shifts to earn as much as possible but she too had her limits. There were days when she felt unable to face the day, her husband was her pillar of strength in those times. Her youngest son’s health was steadily deteriorating too, she was being pulled in so many directions that she was at a loss of how to cope. Unfortunately true tragedy struck when her youngest son passed away three years ago, she and her husband were inconsolable. She had no choice but to bounce back but it was her husband who was so grief stricken that he gave up on life altogether and passed away within a month of his son’s death.

It is testament to a woman’s strength that Qamar put two loved ones in the grave within the space of a month and yet managed to find the will to go back to work and look after her mother and two disabled sons. At times she felt like the walls were closing in on her and she could not breathe. It was at moments such as these when prayer was her only salvation. She picked herself up and made herself smile again for the sake of her children.

Life just keeps on throwing curveballs for some people and Qamar’s next one came when she started to have issues with her right eye. She was unable to see properly and had to make several visits to the ophthalmologist who initially gave her eye drops and then prescribed glasses. It was to no avail as her eyesight continued to deteriorate. At this juncture in her life she knew losing her job due to her flailing eyesight was not an option. She discussed her problem with her fellow health workers who told her to visit LRBT Korangi. Before the checkup Qamar’s worst fear was who would look after her two sons. True to a mother’s nature her concern was only for her children’s wellbeing. It was during this time that Qamar’s daughter was diagnosed with cancer, with 5 young children she had no option but to leave them with her mother while she went for chemotherapy. Qamar had to work around her daughter’s treatment to take time out to visit LRBT. 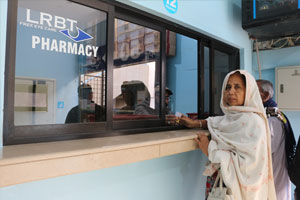 At LRBT Korangi Hospital, Qamar underwent a thorough examination and was diagnosed with retinal detachment due to diabetes. She was given a date for surgery and assured that her treatment would be free something Qamar couldn’t quite believe. The only consolation in her bleak situation was that her condition had been diagnosed properly and she was in capable hands receiving top class quality treatment for free. She had a micro incision vitrectomy surgery (MIVS) to reattach the retina. The surgery was successful and Qamar on her follow-up visit to LRBT expressed her heartfelt thanks saying, “With life knocking me down every step of the way, coming to LRBT and being treated here was perhaps the only thing that kept me from collapsing under the sheer burden of my responsibilities. When life throws you down you have to hold on to every ray of hope and for me that was LRBT.”