At the age of 14, Mohammad Ali seemed to have aged far beyond his years. Now somewhat mature, Ali had once been a naughty, fun loving child, who enjoyed going to the neighborhood school and playing cricket on the road with his friends. This had not happened overnight; the last 5 years had been overly taxing for his family with his father’s early retirement from his job where he was an office attendant. 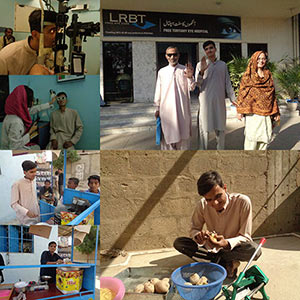 Unexpected at the time, the retirement came as a shock for the entire family. Being the sole bread earner of the family unit of 6, Ali’s father – Siraj – was suffering from an eye ailment that led to loss of vision. With the decreased vision, he was seen unfit for employment and offered an early retirement. Although upset, Siraj had not given up and tried to look for a job at a private set up. Finally finding a position at a small set up, Siraj was happy with the pay structure and hopeful that with the rest received over the period of time he was sitting idle at home, his eyesight would improve.

Though the job was simple, Siraj soon realized that even maneuvering between desks was not coming to him easily anymore. One day, still in his probation period, he tripped over one of the company guests and dropped a tray full of snacks meant to be served. The event led to an investigation where Siraj’s eye condition was revealed. He was laid off with immediate effect. Humiliated and depressed, Siraj locked himself at home, refusing to meet anyone or go anywhere. That was 5 years ago. 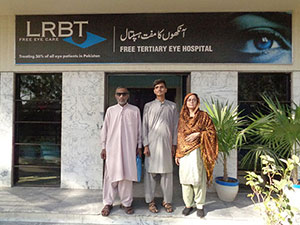 Years passed by with the family depending solely on Siraj’smeager pension for support. Ali, being the eldest, had to drop out of school so that the household finances could be met. Eating only one meal a day, the family had no hope of survival. Ali’s mom stepped in at this crucial time and started cooking for family and friends. Although business was slow with her limited mobility, having to look after the house and the family, it gave them enough to be able to put food on the table. Ali wanted to do more and started selling homemade samosas at a kiosk outside a local kiryana shop. Things seemed to pick up.

However, as luck would have it, Ali started realizing a few months ago that his eye sight was deteriorating very fast. Terrified, assuming blindness was genetic, Ali rushed to ask his old friends for help. It was through one of them that he found out about LRBT Korangi. One of his friends had taken his mother and grandmother there a year ago and was sure that the treatment was of superior quality and completely free of cost. 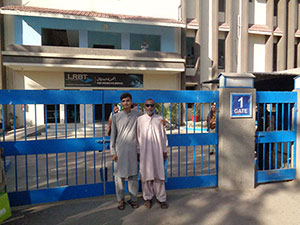 Ali came to LRBT the very next day with his mother and was diagnosed with cataract. He underwent a successful operation at LRBT a few days later and can now see perfectly well again. The sights and sounds of this world seem all the more exciting to him now with his vision restored. Ali has gotten up and risen from the ashes!

Working with greater zeal, the more enthusiastic and positive Ali he has now started selling biryani alongside the samosas at his small kiosk and is grateful to Allah for letting him return and be able to fulfil his obligations.
‘It is unbelievable! My father suffered for five years and I have been able to get free treatment in a few weeks! I will send my father to LRBT now too and once he is well, together we will be able to work harder and be able to send my brothers and sisters to school!’
Ali’s father was also treated at LRBT Korangi a few weeks after Ali and is looking for work again.

What Our Visitors Says

A wonderful emphasis on quality makes this effort outstanding. Best wishes to continue the effort to eliminate preventable blindness

A pleasure to see such great improvements being made to children’s lives. Best wishes

The Sunday Times, London on visiting our Korangi Hospital

This has been an extraordinarily illuminating visit. The Hospital and the dedicated staff need to be commended on the high standard of care