Mashtama – a beautiful 8 year old girl from Quetta – could not, for the most part of her life, comprehend what it meant to be beautiful. She was hardly 5 when her teachers and parents realized that she suffered from vision impairment. What seemed to be a simple issue that could be resolved with medication, took a turn for the worse when white spots started to become visible on her cornea and her eyes started looking opaque. Too young to understand, all Mashtama remembers of that time is that she was scared; of not being able to go to school, of not being able to play, of not doing anything that girls her age usually do. 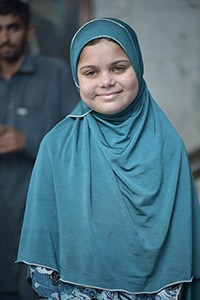 The eldest of the 5 siblings, Mashtama was the apple of her parents’ eyes. Her father, a poor farmer, took her to an ophthalmologist who announced that Mashtama suffered from corneal opacity and the only possible cure – corneal transplant – was next to impossible. For one, it was too expensive for them to be able to afford, for another, procuring a cornea could take years – if there was a possibility at all.

Disheartened by the bluntness of the doctor, Mashtama’s father, the sole bread earner of the family, had no option but to take her back home and have her drop out of school. Years passed and Mashtama forgot how to smile. Seasons, occasions, were mere days to pass for this devastated young girl. She could not enjoy or participate – she could not even see from the sidelines. Dejected, Mashtama became a loner and one could hardly ever see her speak. She stayed indoors, in the confines of her home – the only place she felt safe. Her parents were the only ones she spoke to – she could not relate to her brothers and sisters anymore who would not sit with her and chose to run and play instead.

Her luck finally changed for the better when her father’s cousin visited from Karachi. A taxi driver in a big city, his work took him to different places and he met people in various situations. He remembered having once taken a passenger to LRBT Korangi – a free eye care hospital for the poor. He also remembered being told by the passenger that LRBT was also in Quetta. This was all Mashtama’s father needed to know. Together with his cousin, they found out about LRBT Quetta where they took Mashtama for her preliminary checkup. She was referred to LRBT Korangi, Karachi where, after a series of detailed checkups and tests, she was placed on the list for cornea transplant.

The procedure itself was very simple – Mashtama often thinks about the day she was rushed to the hospital, having being told that a few corneas had been made available and if her health permitted, she will receive her share the very next day. With the prayers of her family, Mashtama underwent corneal transplant at LRBT and is thrilled to be able to see again.

Mashtama loves to see herself in the mirror and is learning to smile again. The highlight of her day is being able to play with her siblings again. She looks forward to going back to school:

‘I don’t remember going to school. I don’t know what I want to do yet – but at least I can try now!’

The shy girl cannot wait to be back in Quetta and try doing all the things she only heard others did and only dreamt of doing them herself. She is extremely thankful to the LRBT network for giving back her smile and a future that now she so looks forward to.