Saeed, 11, a happy, confident boy and a student of grade 4 in a government school, lives in Baldia Town Karachi along with his parents and two siblings. Though poor, their father Asif, dreams of having his children study and live better lives than he did. Part of a joint family system where he is the primary earner, Asif feels that if he had been educated, their lives would have been much different than what they are today. Even after toiling eleven hours a day working in a chemicals factory for the past three decades, he has no savings to speak of. They live in a rented house and he earns a meager sum of Rs. 350 per day, with which he has to support his three young children, a wife and two unmarried sisters. 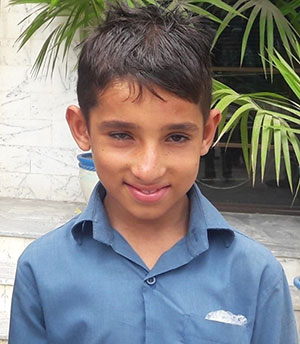 Saeed, his youngest, is one of the best students of his grade and they are immensely proud of him. Saeed loves sports and is often found outside on the street in front of his house playing a vigorous game of cricket with the neighborhood boys. He dreams of making it to the national cricket team one day.

Unfortunately, all of Saeed’s dreams were shattered when while playing cricket the ball hit him on his right eye. His friends immediately alerted Saeed’s mother, who assuming it’s a normal injury used a homemade remedy to help dull the pain and swelling.

Saeed temporarily felt better, but in subsequent days, he found he could not see the blackboard in his classroom clearly and his eyes started to water whenever he concentrated too much while reading. 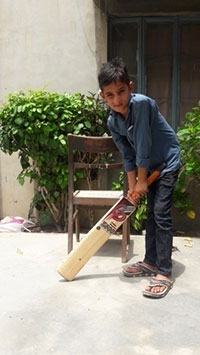 After a couple of weeks, his teachers noticed that Saeed’s grades were falling; he was not paying attention in class and was often staring into space. Previously a confident and outspoken child, he was now withdrawn and quiet – the playful look in his eyes and ready smile were a thing of the past. He looked down while speaking to others, avoided crowds and playing with his friends and siblings.

Although Saeed’s parents noticed the change in him, they thought it was just a phase, till one day they got a call from school – the news was not good. Saeed had started to cry in class, when asked to read from the board, he then got up and ran from the room. Upon questioning, Saeed confided in his teacher that he could not see the board clearly and he was scared that there was something wrong with him. His teacher told Saeed’s father to take him immediately to an Ophthalmologist. When Asif questioned his son why he didn’t confide in him earlier, Saeed with tears in his eyes replied,

“I did not want you to worry; you have such high hopes from me.”

Asif took his son to LRBT Community Eye Health Centre in Baldia Town the very same day; Saeed was diagnosed with traumatic cataract in his right eye and was told that he would need to go to LRBT Korangi Hospital for immediate surgery. Worried about the cost of the surgery, Saeed’s father voiced his concern to the Ophthalmologist. Fortunately for him he had come to the right place as treatment at all LRBT centers and hospitals is free of cost. Weak with relief, Asif took his son to LRBT Korangi where Saeed was given a date for surgery.

Saeed’s surgery was successful and he is able to see clearly once again. Having been so close to living in darkness, he truly appreciates the gift he has been given. He is back in school and working harder than ever before. Smiling from ear to ear, he looks at the camera with great confidence as he shares his dreams of becoming a cricketer.

“I thought I was losing my eyesight and was terrified that I would have to drop out of school and give up my dream of playing cricket – to have my sight back is a miracle.“ He further confides, “One day I want to help others, the way that LRBT has helped me.”