Children are God’s gift to parents, they are HIS blessings. However, for some it turns into test of their patience and their belief in God. 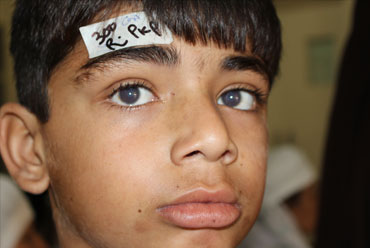 10-year-old Sher Muhammad is one such case. Since childhood his vision was hazy and it had gradually deteriorated over time to the point where he was hardly able to see at all. When kids his age were giggling, playing, exploring &learning, he was struggling with the minutest of tasks.

Hailing from a small town in Sukkur, Sher’s parents took him to all the hospitals and clinics in their vicinity but to no avail. They tried everything but Sher’s vision kept on deteriorating. Lack of good facilities and experienced doctors also contributed to improper diagnosis. The lowest point in each day was when Sher would come back dejected from school, having had to endure another scolding from his school headmaster for not paying attention in class. In reality Sher was unable to see the blackboard and was thus unable to keep up. Sher’s school teachers were ill equipped too as they had never been confronted with such a case before so they assumed that he was making it up to avoid studying. Up till now Sher had been able to manage with difficulty trying to lead as close to a normal life as possible, but in the past couple of months his vision had deteriorated to such an extent that was unable to cope. 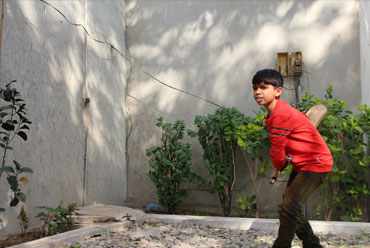 One day he came back home sobbing uncontrollably. His mother, Sehr Bibi, ran over and hugged him tight. She could not control her own tears for her worst fear had come true, -Sher’s headmaster had told him to leave school for his grades were not up to par and he was showing no improvement. Sher was devastated for he dearly loved his school and his friends; his mother consoled him the best she could but had little hope of her beloved son being able to see again. Some relatives advised Sher’s father to take him to a bigger city and thus better hospitals but being a poor construction supervisor with five school going children he knew his limitations. He applied for a loan at his company but it was rejected as he had still not repaid the one he had taken last year to fix the roof of his home which had collapsed due to heavy rains.

Sher tried to put up a brave front, he would go outside and play cricket with his friends but that too became impossible with time. His siblings tried to keep him busy but they too were helpless when Sher’s mobility became limited. Sher’s father had to travel to Karachi for some work and incidentally he was sanctioned to work on a building under construction near LRBT Korangi Hospital. Every day he would see people lining up outside the hospital and upon enquiry he learnt that the Hospital did free treatment of all kinds of eye ailments. With hope in his heart he went to LRBT Korangi and discussed his son’s case and the doctor advised him to bring Sher for a thorough checkup. 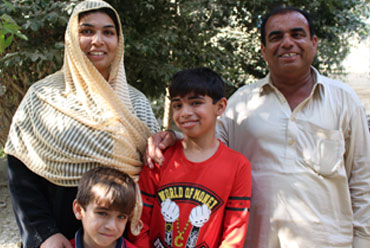 Sher’s father immediately called his family to Karachi and upon his checkup Sher was diagnosed with corneal opacity in both eyes and was told that his condition was treatable with a corneal graft. Sher’s parents were overjoyed; they finally saw a ray of hope for their beloved son and waited anxiously for a cornea to be available. Since there were no local donors in Pakistan for cornea so the wait could mean years but luck for once smiled on him and a donor arranged a cornea from abroad and Sher’s wait only lasted a few months. Upon receiving the call from LRBT Korangi Sher and his family’s happiness knew no bounds. Sher’s reaction when his bandage came off was a sight to behold. He could not stop smiling and tears kept rolling down his eyes. The family is back home in Sukkur now and will return soon for his left eye’s corneal graft. Sher’s parents spoke to his school’s headmaster and Sher is back to school, his teachers are now much more supportive and assist him in whatever manner possible. Upon leaving the hospital Sher held the doctor’s hand and said: 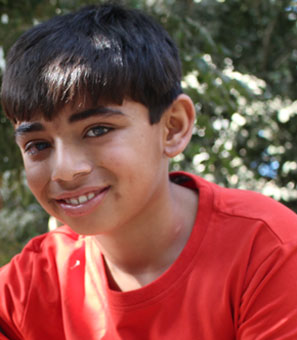