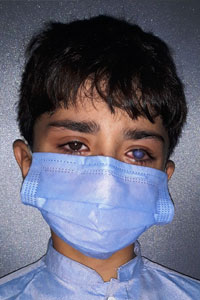 Eyes are the most precious of our senses, yet we often neglect their care and this negligence can lead to lifelong blindness. Little Rehmat, just 8 years old, faced such an ordeal when what started off as a simple case of itching in his left eye led to his cornea being damaged for life.
Hailing from Quetta, Rehmat’s father, Ghulam Rasool, supports the family by stitching cloth for tents. His aging father and unmarried brother also live with him in their three bedroom rented house. With five out of his nine children enrolled in school, Ghulam Rasool is overburdened with responsibilities. His brother a daily wage earner contributes what little he can towards the household expenses. A major chunk of Ghulam Rasool’s income goes towards paying rent but despite their combined efforts the brothers have not been able to own a house of their own. 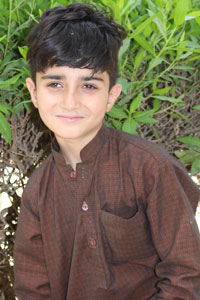 Rehmat is Ghulam’s middle child, since birth Rehmat has carved a special place in his family’s heart owing to his sunny disposition and friendly, helpful nature. Studying in grade one, Rehmat dreams of joining the army. Despite his young age, his vision for his future is clear. He wants to serve his country and to achieve that he strives to study hard and is already top of his class. About four months back, Rehmat’s left eye started to itch, he was constantly rubbing his eye and it started to affect his studies as he was distracted most of the time. Eventually his teacher called Ghulam Rasool to school and advised him to get Rehmat’s eye checked. 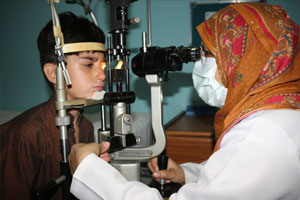 Rehmat’s angel in disguise came in the form of their relative who had previously been treated at LRBT. He advised Ghulam to take Rehmat to LRBT’s hospital. Ghulam was worried the fees but his relative assured him that treatment is free for those who cannot afford it. Having never experienced free treatment himself Ghulam was hesitant and delayed going till he had some money saved up, but when Rehmat was unable to see at all from his left eye he quickly rushed Rehmat to LRBT. Rehmat was examined and told he would need a corneal transplant at the earliest as his cornea had been damaged due to neglect. The corneal tissue was arranged and transplanted successfully. Rehmat is now able to see again with his left eye. 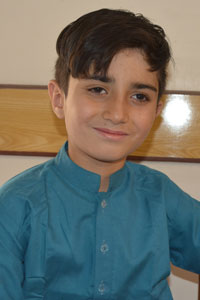 “My first reaction was fear when the doctor told me that my son would need a major surgery to replace his cornea. Just the thought of him having the surgery under anesthesia was enough to give me nightmares, but the empathy and professionalism of the doctors and staff at LRBT gave me the courage to agree to the surgery. It was the best decision of my life, the quality treatment and care that my son received has enabled him to see clearly once again. I have my happy, smiling Rehmat back and he is more determined than ever to serve his country, where institutions like LRBT exist that enable the underprivileged to live independent, fulfilling lives.” – Ghulam Rasool.